Maureen Fritch (WBE) and Igor Bron of E Electrical Contracting, LLC have received the Patriotic Employer award from the New York Region Employer Support of the Guard and Reserve in July 2017.

Both Fritch and Bron received notification from the Department of Defense that they have been nominated, and approved, for this award under the Employer Support of the Guard and Reserve Program.

According to the Employer Support of the Guard and Reserve website, the Patriot Award is “awarded to individual supervisors” and bosses who have been nominated by a Reservist and/or Guardsmen employee. Employers who receive the award “support citizen warriors through a wide-range of measures including flexible schedules…and granting leaves of absence.”

The nomination comes from Teresa George, a dedicated employee and apprentice of EEC since 2014. Currently, George is a part of the US Army and on active duty. When she is not on active duty, she works for E Electrical Contracting on a variety of projects and maintains her schooling through IBEW Local 3’s apprenticeship program.

Maureen Fritch (WBE) and Igor Bron thank Teresa George for her service and the nomination. Both are proudly displaying their Patriotic Employer awards in both of E Electrical Contracting’s locations. 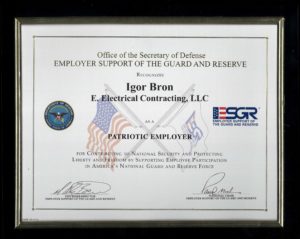 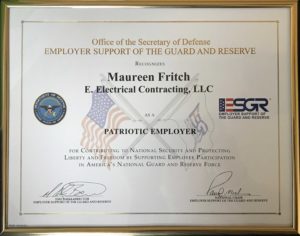